M ention the 1979 Daytona 500 and his famous “confrontation,” both on and off the track, with Cale Yarborough and any stock-car racing fan knows exactly who you’re talking about because, quite simply, it was the race and the result that put NASCAR as we know it today on the map.

The morning of Feb. 18, 1979, broke cloudy and rainy over the Daytona International Speedway, but that was nice compared to most of the rest of the eastern seaboard of the United States which found itself buried under a thick blanket of snow. From Jacksonville, Fla., to Maine folks were stuck in their homes that Sunday with little to do but flip channels on the TV, and if they flipped to their local CBS affiliate they found something they had never seen before.

That day, CBS was broadcasting a NASCAR stock car race live across the country from green flag to checkers for the first time ever, and since in those days viewers only had a choice of what was shown on the three major networks, many of them watched, and the race they saw proved to be the defining moment in the historical evolution of the entire sport. 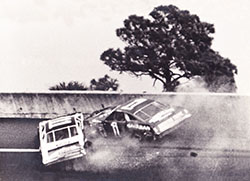 Donnie often says legendary NASCAR founder William “Big Bill” France had a special relationship with the Man upstairs because after awhile, the sun came out, they were able to dry the track and the race went on as scheduled. Donnie also says it was a good thing, too, because, with a race so important, there was no way Bill France Jr., son of “Big Bill,” was issuing any rain checks that day.

The race started and Donnie, going from the outside pole, Cale and Bobby were the class of the field until Lap 31 when trouble began. Donnie was leading coming off turn two and down Daytona’s long backstretch with Bobby in second and Cale in third. Bobby pulled to the inside of Donnie and got his right-front fender just past Donnie’s left-rear bumper. Then Cale touched Bobby, who tapped Donnie and suddenly all three were spinning off the track and into the infield grass, which was like a swamp thanks to all the rain.

Suddenly it appeared the three frontrunners were done for the day, but all three cars got back on the track with Donnie listed two laps down, Cale three and Bobby too many to be a factor — or so it seemed. But when the day was done, he would figure in the finish. Man would he ever.

Both drivers went back to work and over the course of the next 77 laps, Donnie made up five miles and Cale seven-and-a-half and the stage was set for as dramatic a finish as any Hollywood could ever script.

It all came down to the last lap with Donnie in front, Cale on his tail and the trophy for “The Super Bowl of Stock Car Racing” waiting two-and-a-half miles away. As they came out of turn two on the last lap, Donnie moved a half a car width down from the racing groove and suddenly Cale hit him in the back bumper and turned him slightly sideways. That started a chain reaction that saw the two bash and bang their way door handle-to-door handle down the backstretch until finally they both crashed going into turn three, and Richard Petty slipped by to win his fourth Daytona 500.

What happened next is probably the thing that most caught the attention of many first-time TV viewers because it was as good as anything they had ever seen on their Saturday evening wrasslin’ shows and this was for real.

It all came down to the last lap with Donnie in front, Cale on his tail and the trophy for “The Super Bowl of Stock Car Racing” waiting two-and-a-half miles away.

With the two cars stopped in the infield, Donnie and Cale proceeded to have a “discussion” in which Donnie recalls questioning Cale’s ancestry and just as that seemed to be dying down, Bobby pulled up to ask Donnie if he needed a ride back to the garage. At that point, Cale walked over, told Bobby the whole wreck was his fault anyway because he’d been blocking all day and proceeded to shove his helmet into Bobby’s face inside his car, cutting him across the bridge of his nose.

At that point, Bobby exited his car and proceeded to have a “discussion” of his own which resulted, as Bobby likes to say, with “Cale beating on my fist with his nose.”

Somewhere in the fracas Donnie told Cale if he was going to fight somebody he should be fighting Donnie, but the truth is that actually the scrap was mostly between Bobby and Cale.

Still, the whole racing world now knew Donnie as the guy “who duked it out” with Cale after their wreck in the Daytona. Shoot, when Donnie got back to the garage afterward even his own mother chastised him for getting in a fight on national TV, and he had to tell her it was Bobby who got in the fight, not him.

Also in the garage afterward, Bill France Jr., pulled him aside and told him NASCAR really didn’t need that kind of stuff to sell tickets, but the truth is that if a figure could be calculated from the number of tickets NASCAR has sold over the years as a result of that “fight” it would truly be mind-boggling.

It is without a doubt one of the most iconic video clips in NASCAR history and has been played countless times since that dreary February day. Likewise, a series of still shots of the exchange is among the iconic images of NASCAR. In short, even after all these years it is still one of the most well-known wrecks the sport has ever seen and thus continues to have a special place in its heritage.

For Donnie, it was one of several close calls that ended in disappointment in the “Great American Race,” but he did win the famous Firecracker 400 on the high banks of Daytona in his career. He also recorded wins at Rockingham, Bristol, Charlotte, Atlanta and twice at his home track in Talladega. 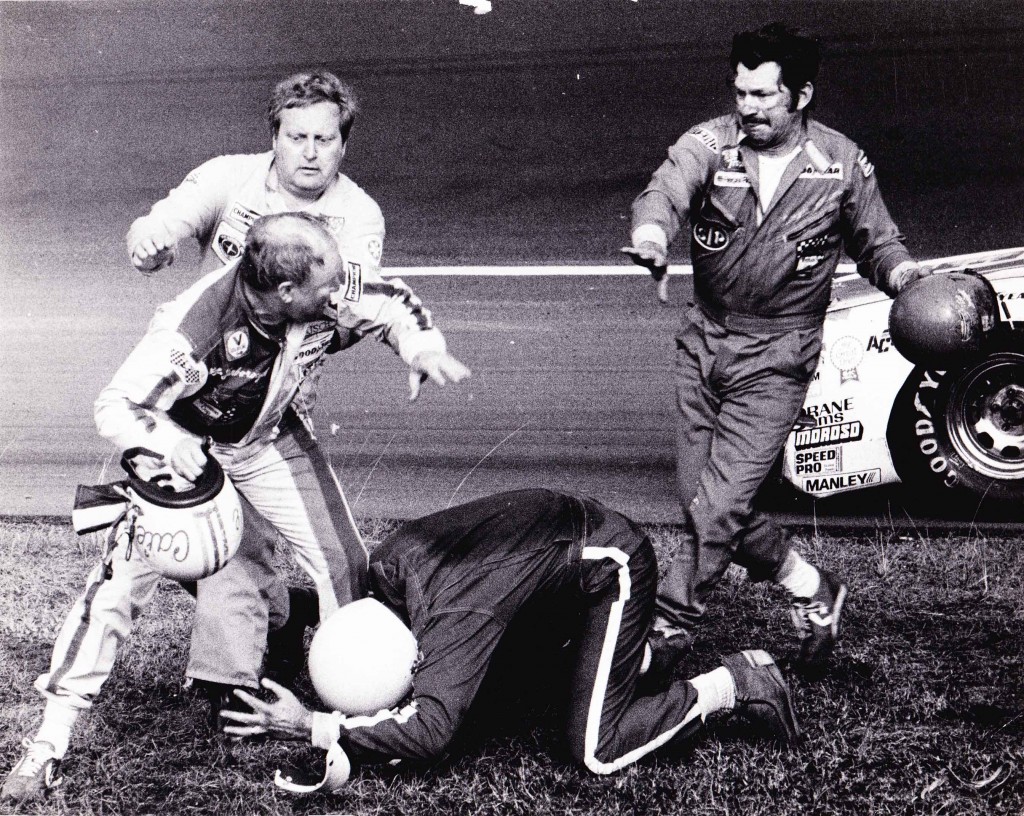 At that point, Bobby exited his car and proceeded to have a “discussion” of his own which resulted, as Bobby likes to say, with “Cale beating on my fist with his nose.”